Is there an unfair advantage when 2 arbaletmen armies clash?

There was a question about fighting mechanics over at KaM forum (link). To sum up in one sentence – Is there an unfair advantage when 2 arbaletmen armies clash? 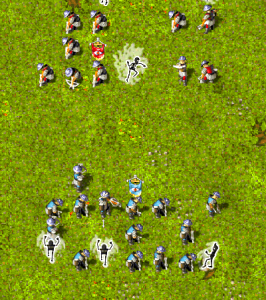 Imagine there are 2 armies of arbaletmen standing in front of each other. Top vs bottom, Red vs Blue. Order to attack arrives at the same moment to both armies. Who has an advantage? Place your bets and proceed inside:

One of the joys of having a working game engine is to be able to run it in crazy environments. One of such is stripping all of the rendering and terrain updates, keeping just the games logic, which being unleashed can run at crazy speeds of measured at around x1000.

I have configured our test-runner tool to simulate 1000 fights between 2 groups of xbows. Each group had 7 columns and 4 rows – total of 28 xbows. Groups were 4 tiles apart facing each other. Attack orders were placed on the same moment.

Results were recorded and displayed as a distribution chart: 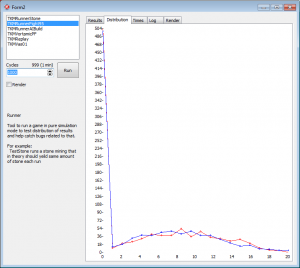 From the chart above we can see that each team was defeated (had 0 soldiers left) ~500 times. All other times some remained alive. In precise words, Top-Red won 50.4% of fights, Bottom-Blue won 49.6% of fights. The unfair advantage mentioned at the topics start, seems to be within 1%, which is negligible considering many other factors in play: tactics, attack orders timing, etc.

Other points of interest:

This entry was posted in Gameplay. Bookmark the permalink.

2 Responses to Is there an unfair advantage when 2 arbaletmen armies clash?