After a long break, here’s the continuation to the series of posts about KaM Remake history.

During development each project has more than one point that can be called a start. There’s a time when a glimpse of an idea is born, when “an idea” becomes “the idea”, when first line of code is written, when first prototype works out … There are plenty of such points and it’s hard to pick just one and proclaim its a “true and utter start point”. One of such points that is more important than others is a public announcement. Before announcement you need to be damn sure the project will work out and has a chance of being finished. Once the announcement is made you will need to be dead serious putting all the effort into it.

I think it was The Knight who once said to me that only one out of 10 hobby projects is going to get completed. Back in 2008 KaM Remake was only the third one in a row of KaM remakes (first there was OpenKAM, second was TKE). Announcement is a one way road and it can’t be reverted. Seeing those examples I realized that I would not want KaM Remake to be just another hopeless attempt in that row, so I had to be more than confident in myself and in KaM Remake before announcing it.

During March – May in 2008 Alex was busy with sketching out tasks and actions systems, player control. While I was filling the gaps and adding depth by looking at reference classes he made and writing new ones, filling them with proper behavior. KaM Editor started to take its new shape. Each day something new has been added, houses got animations, serfs learned to bring stones, laborers to dig roads and woodcutter was walking out of his hut to chop some trees. KaM Editor was starting to look like an actual game.

Somewhere in the middle of May Alex has finished actively participating in the project and handed over everything to me. KaM Remake did not had many features yet, but that seemed minor compared to the huge breakthrough Alex has made at assembling the games core and teaching me how such game engines work. That was the time when I seriously started to believe in KaM Remake. How hard could it be to add another dozen of houses, actions and tasks? So I thought 😉

On 21th of May 2008 the following post was published throughout KaM forums and on my site: 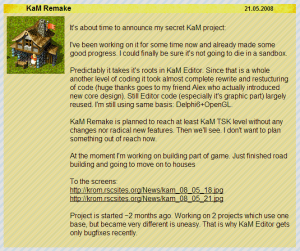 A couple of first “in-game” screenshots came along: 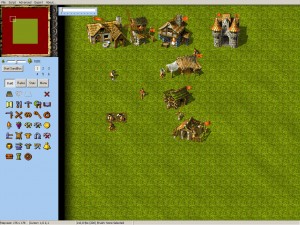 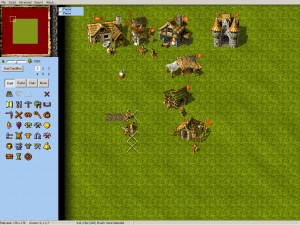 There was working production chain from corn to bread. Stonemason and woodcutter would go out to a location and mine stone/trunks from air, and builders would build a road on predefined spots. If I remember correctly, there was no player control, everything was scripted and/or task driven. There was no pathfinding nor unit interaction back then, serfs would go through houses and each other without a clue. As you can see GUI was completely nonsensical. Those are details, the most important thing was that the game’s look and feel was approaching to the original.

English KaM community was quite small at that time, maybe just half a dozen of active forum members. The project was received quite cautiously, briefly followed with questions “why do you make this? <..> how long it will take <..> ?” and skepticism from TKE team as they thought that I was competing with them. However that was not the case. In projects of such scale, cooperative competition always brings best results, so exchanging knowledge was better course than hiding it. It is partly for the same reason, that KaM Remake was made open source – to allow more people to join the work on it.

In next chapter I’ll uncover some more about GUI issues and a long pause in development before Lewin has joined and project got super-speed.