We are preparing to release a major update to the KaM Remake. Improvements include dynamic scripting, massive map editor improvements, adjustable game speed in multiplayer and balance changes. 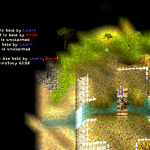 Probably the biggest new feature in this release is dynamic scripting. It allows map authors to write script code for their map which is executed as the game runs. This allows special missions to be easily created such as tower defence, quests, capturing victory locations, escorting VIP units, etc. The screenshot to the right shows a multiplayer map which uses script to create a custom objective: capture 3 of 5 victory locations and hold them for 5 minutes. There is an unlimited number of possibilities for dynamic scripting and we are hoping to see some innovative and exciting maps in the future! To learn more, read our wiki page on dynamic scripting.

This release also features massive improvements to the map editor. There are now terrain brushes similar to Krom’s editor and most other missing features have been implemented too. Although there are still a few things missing (such as undo and magic water), in all other aspects the map editor should now be as good or better than Krom and Lewin’s KaM editors combined. 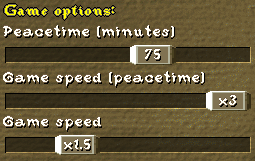 One of the most requested features is faster game speed in multiplayer. It has finally been implemented in this release. There are two sliders in the lobby which let you set the speed during and after peacetime separately (see image).

We have made some balance adjustments with the aim of making the game more versatile and fun to play. Until now we have found that units with shields (axefighters, swordfighters, scouts and knights) are not often used in multiplayer games because it is more effective to make the cheaper melee units (lance carriers, pikemen, militia). In order to counter this we have given units with a shield a +1 defence bonus against ranged units (bowmen and crossbowmen). This change has been tested for a few months by volunteers from the community, and we have received overwhelmingly positive feedback from these players.

The complete list of improvements is much longer and we will be highlighting more of them in later news posts.

Once again we’d like to take this opportunity to remind you to consider donating to support future development. Thank you to everyone who has supported us so far.

Let us know what you think by commenting! 🙂
Lewin and Krom.

This entry was posted in Uncategorized. Bookmark the permalink.