After rigorous testing and bugfixing, numerous nightly versions and 5 release candidate versions, the long awaited update to KaM Remake is now available! You can find it on the downloads page. 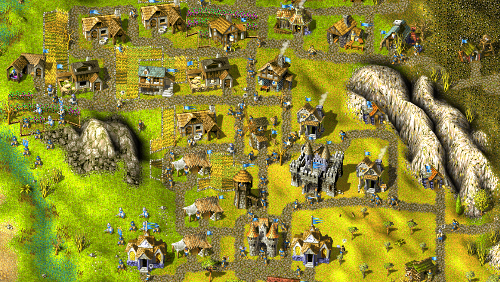 From this version on we have dropped the “Demo” tag from the title. Now it’s KaM Remake rSomething. The project has matured beyond a demo and into a fully-fledged game which no longer needs “Demo” in the title.

There are too many changes in the new version to list all of them, but here are some of the most significant:

And as usual – a host of other smaller improvements and bugfixes. There are also many new heavily scripted missions including RPG adventures, multiplayer co-operative sieges, and even a Snake clone.

We would like to take this opportunity to remind you to please consider donating to support the future development of the project:

Thanks to everyone who has contributed to this update through beta testing, map making, scripting, programming, bug reporting, translating or donating. And thanks to the entire Knights and Merchants community for keeping the game alive and strong after all these years.

We hope you enjoy the update! 🙂
Lewin and Krom