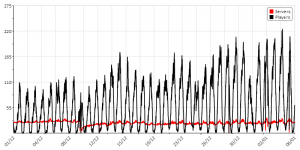 The chart shows the online player count since the 1st of December. r6720 came out on the 9th and is getting more and more players involved since.

Q: How do I install KaM Remake if I have the Steam version of KaM?
You need to launch Knights and Merchants from Steam at least once before you run the KaM Remake installer, otherwise the installer will not detect it. Apart from that, just download the full installer from our downloads page and run it. If you want to have the Steam overlay while playing, you can add KaM Remake to your Steam library by clicking Games -> Add a Non-Steam Game to My Library on the Steam main menu.
END_OF_DOCUMENT_TOKEN_TO_BE_REPLACED

Things to come in the next Demo

There has been no news on the homepage for a few months now. Let’s fix that! While the next big Demo release date is not yet planned, we have already coded some nice features that will be included. The list is not fancy, but is growing as we work on it.

END_OF_DOCUMENT_TOKEN_TO_BE_REPLACED

In the latest release (Scripting Demo r5503) campaign The Shattered Kingdom mission 18 was impossible to win because AI would send swarms of soldiers to players base. Finally the fix is ready and uploaded. The fix can be found in downloads section. To install the fix you need to unpack archive contents into your KaM Remake r5503 installation folder. Doinf so will replace KaM Remake\Campaigns\The Shattered Kingdom\TSK18\TSK18.dat script file. After that you can replay the mission and AI will behave normal.

We have received a number of bugreports since release about mission 18 being impossible to win because AI would send swarms of soldiers to players base. We have checked the mission and indeed there’s a bug. I’ve just sent everyone who has reported the bug in past month a fixed script, if the fix will be accepted we will upload it to the public.

Tech info for mapmakers:
The bug appeared since prior to r4179 AI attacks would copy missing properties from previous attack, but after r4179 the attacks are initialized with zeroes each time. This means that in order to be working properly the attacks need to have all fields listed explicitly. The most affected field is the attack delay – it will be set to 0 instead of copying previous attack value.