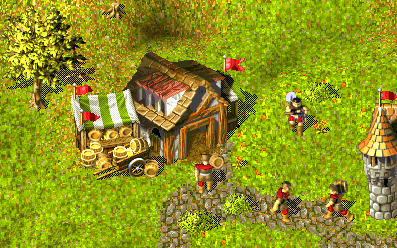 Under two months since the last release we have a new demo ready! As always you can find it on the downloads page. If you already have the previous version installed (r2411) you will only need the 14mb update patch. (kam_remake_update_r2678.exe)

Server admins: Please update your servers as soon as possible.

A new member Danjb has joined our development team. Dan has already redesigned the lobby and added a shuffle option for the music player, you’ll see both of them in this release. He is new to the language (Delphi) but he’s learning fast, it’s great to have another person in our Krom and Lewin team.

Malin from kamclub.ru created over 300(!) sprites showing wares in the marketplace! (see picture above) We would like to thank him for this enormous contribution to the project, it really brings the marketplace to life! 🙂

Thank you to everyone who helped with this release by making maps, playtesting, translating, and reporting bugs. Please help spread the word about the Remake by posting information about it on forums, social media sites and anywhere else you can think of! We want to attract as many players as possible.
See you online!