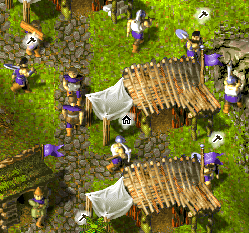 The popularity of the KaM Remake continues to grow. In the last release (r3392) we reached over 18,000 downloads, and the number of players online every day is steadily increasing. This is great news and gives us extra motivation to continue development. This latest release includes many exciting new features and we look forward to bringing you more updates after this one. You can get the release from the download page.

We would like to take this opportunity to remind you to consider donating to support future development if you haven’t already done so:

In this release we have made a balance change to food with the aim of making food production a more significant aspect of the game (especially in multiplayer), as it was in original Knights and Merchants. Due to this change you will probably need to build food production earlier than you did in the last release. We have also made wine a more practical source of food because we found most players considered it ineffective compared to other food sources.

Here is a summary of some of the most significant changes:

Thanks to all of the beta testers who helped to make this release as bug free and stable as possible. We hope you all enjoy playing it 🙂
Lewin and Krom.