Thank you for your patience, the KaM Remake Scripting Demo is finally ready! 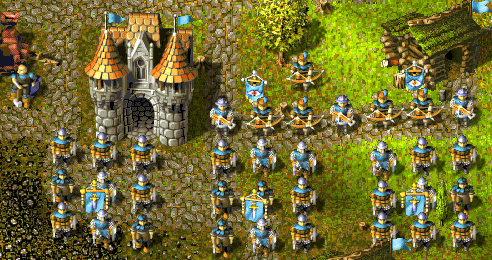 UPDATE (30/06/2013): We have fixed a memory leak in the dedicated server and released updated server executables (r5047). You can get the new ZIP on the downloads page. Server operators please update!

You can find it on the downloads page. If you already have the previous version installed (r4179) you only need to download the update installer (42mb), otherwise you will need the full installer (258mb).

The biggest feature in this release is the new dynamic scripting system. It allows map authors to write script code which is executed while you play, allowing simple things like reinforcements arriving at the edge of the map, as well as entirely new game modes such as Fun with Flags (Florescence One) by Siegfried. Ben has organised a competition for dynamic scripted missions, so expect to see a lot more creative and exciting new missions over the coming months!

Here are some of the most significant changes:

The full changelog can be found after installing in the file Changelog.txt.

We’d like to give a big thanks to all our beta testers who helped make this release stable by finding and reporting bugs during beta testing.

Please consider donating to support future development of the project:

We hope you enjoy the new release, let us know what you think in the comments! 🙂
Lewin and Krom.